Surfing the Emotional Wait – A Reading from the Book of Tarot for April 12, 2012 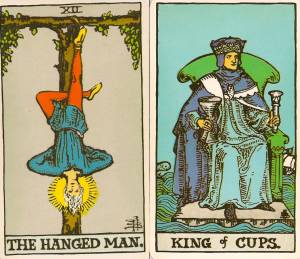 Two Tarot cards are profiled. These cards have been pulled to induce synchronicity. The intention is for you to watch for the consciousness they represent to be reflected in the events of your day. This practice known as Yoga of the West, is designed to build a bridge of intuition between the reader’s unconscious and conscious mind; a bridge to wholeness. 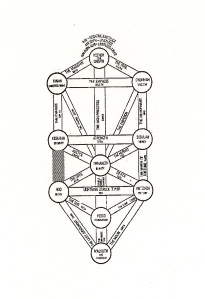 The first card is an archetype card chosen according to the numerology of the day. Each archetype card in the Tarot represents a path on the Tree of Life (Kabbalah). Today is 04, 12, 2012, or number 12: The Hanged Man. The path this card represents is shaded on the diagram included. The consciousness on this path is known as , MEN, a powerless state.  A path on which we become conscious of that which we have no power over.

The Hanged Man does not have the power to change all that needs to be changed. That power is completely left to the Light. The color yellow, knowing, glows on this card, both on the figure’s feet and around his head. This “hanged” figure is perfectly content upside down because he/she knows that it is only a matter of time before what needs to be right side up will come to be eventually.  Note that the man’s legs cross in an odd formation, one leg straight and the other crossed at a right angle. This is a symbol of a crossroad, in this case a crossroad we are powerless to do anything about right now. Wholeness requires us to willingly accept our powerlessness. To know, in fact, that our not acting is exactly the right thing to do to achieve wholeness.

Today’s face card, or aspect of personality to watch for is the King of Cups. Watch for a master of riding emotions. The King of Cups is a master of the waves of emotion. This card’s energy, this Master, holds feelings, the cup in his right hand, the hand that brings life into form. This tells us he has control over his emotions at all times, he surfs the waves. This King does not repress his emotions and unconscious impulses but has learned to accept and deal with them in a balanced manner. He goes with the flow.  His left hand bears a light and rests on top of an armrest that reflects a pillar like the ones found on the High Priestess card. These pillars symbolize the polar opposites of severity and mercy. Here the pillar of severity is covered by the King’s robe. This King covers the worst of emotions with mastery; he sheds light on the rightness of riding out turbulent emotions. In the background, we see a ship in full sail and a leaping fish, both signs of abundance having the King’s back. The fish is also the symbol of spirit and creativity and around his neck there is another fish that represents the balance of the unconscious with the conscious. Wholeness for the King of Cups is to be a judgment free eye in the storm that is awareness of what is conscious vs. unconscious.

People also consult the Tarot as an oracle. Caution is advised. An oracle opens the door to spiritual deception as easily as spiritual truth. To read more about Yoga of the West go to http://bit.ly/9BiovO

Filed under Climbing the Tree of Life