I’m flabbergasted by the flames.

Reports tell of murder in a Temple in Tokyo, a priestess downed by a brother in a family feud. The primary reports refer to the head of the religion being assassinated.  This movie level action story brings to mind one of the few oddball voices that I listen to, Ben Fulford. With a grain of salt, mind you.  Most oddball voices are not worth your time, even Fulford goes  full crackpot.   https://benjaminfulford.net/    Sometimes his reports about White Dragon society and Carlyle factions are so off the wall they extend beyond adding salt to be believed; Karzarkians or something.  You have to not truly believe everything that comes out of his work, he is stranger than fiction.

That said, I’m a very fractal reality observer. From my powerless position, I have come to  think that different levels of perception will reveal different worlds within worlds. Worlds in which truth is almost always stranger than fiction.  So blow me away as I sit here in Southern California grateful for not having to evacuate for fire, while not far from me many aren’t so lucky. In other words, this story out of Japan today is a Ben Fulford reality check on fire. I sure wish I could be a fly on the wall in whatever room the “Abe” and Americans who know what is really going are talking.  Weird.

Time reported head priest too. First report on who was killed. 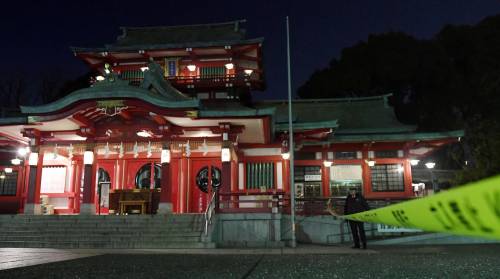