As we light candles and look for answers to the most recent tragedy to terrorize America, remember we are facing a global economic crisis. Always in history times like these have been handled by the elite with wars. Deliberate instigation of crisis to cover the crisis while maintaining control of the reconfiguration of economies. Pay attention! The game is in full swing. War is over if we want it.

The Internet Enables the People to be the Press

Only recently have I fully grasped how completely the internet opens the door for the People to become the most powerful force on the planet in an organized freedom based fashion.  By actively posting and creating content on the internet we directly compete with Mainstream Media sources.  Mainstream Media Wikileaks recently twittered is what Chomsky has stated to be analogous to a Tyranny’s bludgeon.  The Tweet used this link as a better analogy.   IT IS!!  https://en.wikipedia.org/wiki/Cymothoa_exigua

Beware of parasites on all levels of being.   Be well.  Be strong people.

Filed under Climbing the Tree of Life, Money, Ron Paul

Military Brass asked position on firing on US Citizens

After listening to this, I can see we do have a very real problem when it comes to our debt to China. US citizen’s have traded their sovereignty for cheap goods, just as Native American’s before us traded the land for cheap beads and goods. How we deal with this will make or break mankind’s soul.

Obama to Top Brass: Will you fire on US Citizens?

Two stories came to my attention today related to the black out of Ron Paul’s campaign in the media.  One deals with Gallup polls leaving him out as a choice, the other is CNN blocking news of the thousands of people showing up to support him in California.  Luckily these stories are being cached before they are deleted or blocked. 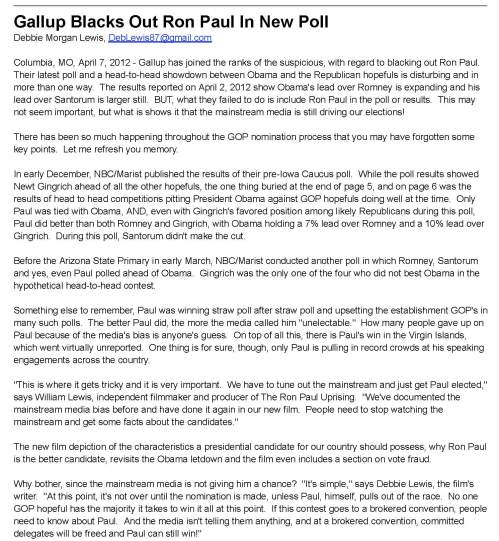 “The Black Swan” author speaks truth about the Monetary policy

Government by secrecy is over, if you want it!

News keeps being suppressed regarding what is happening with Ron Paul.  There is clear evidence that ballot counts are being tampered with at the Republican caucuses.  Yet, people keep showing up and giving money.  Freedom and the original ideals of the United States enshrined in our Constitution are not suppressible!   Classic tortoise and the hare happening.  This just may go down in history as the year of Ron Paul.

Can You Hear Me Now?!

I woke up this morning laughing in full heart bloom about this picture on Facebook. Laughing with full heart bloom: “Can you Hear me Now.”  Sigh.  Laughter is as powerful a discharge of pain as crying is.

CAN YOU HEAR ME NOW, ba ha ha ha ha. As if what I have to say can be any more powerful than what Jefferson warned would happen if we ever let central bankers control our nation’s currency issuance, “If the American people ever allow private banks to control the issue of their currency, first by inflation, then by deflation, the banks and corporations that will grow up around them will deprive the people of all property until their children wake up homeless on the continent their Fathers conquered.”  Can you hear him now?!

What a long strange trip it’s been since I sat at a table in Willy’s BBQ in 2004 looking at fear dominate the features of my mate as I outlined my plan to sell my house and write a book. What I planned to write in Choosing Honor scared the hell out of him. The United States was in the thick of rabid Christianity and truth blocking patriotism. Here I was talking about putting myself out on the front line against the thick.

It had already been a long strange trip that brought me to the place that inspired me to write Choosing Honor. I was driven to reveal what I knew. My motivation was not just,” JESUS, PROTECT US FROM YOUR FOLLOWERS,” as another Facebook post so poignantly pleads. Though ultimately, I am driven by the spiritual realization of the Messianic teaching that we are all supposed to become Messiahs. The teaching about realizing the Kingdom is not about waiting for Jesus to come back and bring the Kingdom to us, it’s about standing up and being a Messiah, being King for ourselves in order to create and be the Kingdom. This is the ultimate common sense spirit that drove the birth of the United States.

Messiah Mints "Save Your Breath"

The Unemployed Philosopher’s Guild gift selections this year include “Messiah mints.” The subtitle on the case is “Save Your Breath.”  I gave them out to all my Christian friends this past Christmas.  The joke was on me. I’m the little dog barking up the ass of the big dog. My Jewish friends got the joke better than my Christian friends. The Jewish people have been dealing with philistines far longer than any other people on earth. Of course in the light of indigenous people’s knowledge, defining a philistine becomes nebulous. All the more reason to fight long and hard to restore the decentralized power structure embedded in the United States’ founding documents. We may not enlighten others, but we can ensure they have the freedom and tools to enlighten themselves.

Since Choosing Honor came out in 2008 the economic meltdown I foresaw has been fully realized and shored up with bailouts, and quantitative easing. The printing press at the Federal Reserve has been spewing out trillions of dollars night and day in the effort to save the world’s central bank owners and their global corporate/military complex.  Interest rates are being kept artificially low as worthless derivatives are shuffled around in efforts to pretend value when there isn’t any.

In many ways the people of the world have been realizing Messianic power. The Tea Party and the Occupy Wall Street movements are working to “throw the moneychangers” out of the “Temple.” People are becoming aware like never before. Exactly what kind of “Temple” what shape the “Kingdom” should take is not clear. This is the cross we bear, or ride, considering how fast change is taking form.

Letting go, getting off the cross and realizing the Kingdom is not easy.  First we have to recognize the false value mind game that keeps us holding onto the cross. This false value is rooted in a spiritual mandate long preached to all, that we must honor our debts.  The money matrix that holds our society together would not be able to function if we failed to honor our debts. Honor in the debt matrix is key to this paradigm of thought.  Ron Paul recently introduced legislation calling for the US to rescind America’s fictitious trillion-dollar debt to the Federal Reserve. This is one way to right the imbalance of honor currently at work. The debt was created out of nothing by a Central Bank who has acted without honor in allowing the creation of derivatives and false value real estate investments that are taking the entire matrix down with their collapse.  Unhooking ourselves from that cross makes sense. More on Ron Paul’s move can be found here. http://www.ronpaul.com/2011-07-11/ron-paul-rescind-americas-ficticious-1-6-trillion-debt-to-the-federal-reserve/ 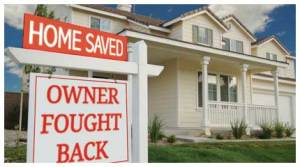 Another way of letting go of the cross is to accept your neighbor’s gain. Currently the government owned agencies Fannie May and Freddie Mac have millions of homes on their books that do not have clear chains of payment transactions and transfers of ownership. http://www.webofdebt.com/articles/homeowners.phpThe mortgage financial contract is supposed to be “sacrosanct,” it requires escrow to establish the good faith of the parties entering into the contract. The paperwork is sacred; the holder must maintain perfect records of the note and all payments undertaken in the contract. If the mortgagee fails to pay as contracted, the bank takes the home, and all monies invested. If the bank or note/paperwork holder fails to keep perfect record of all transactions pertaining to the note/paperwork and proves unable to account for full good faith transactions the paperwork is involved in, then the mortgagee gains outright ownership of the property regardless of how much money has or has not been paid down on the property. The government keeps talking about finding ways to re-finance these homes in ways that the people will be able to afford to stay in them. Reality check, these people should be given outright ownership of the homes. The banks failed to uphold their side of the contract. This is karmic opportunity. The opportunity to right the wrong prophesized by Thomas Jefferson should central banks gain control of the issuance of our nation’s currency. This is about our right to property in the US! 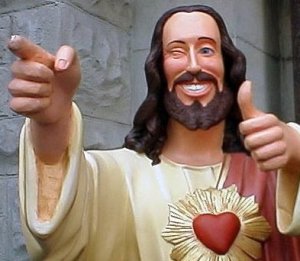 For people to be King they have to own property outright and have the power to create money. These are the powers of the King.  Our original monetary policy based on gold gave individuals who had gold the right to issue notes of credit. The Federal Reserve Act took this power out of the hands of the people and put it into the hands of a cartel of bankers who then began to issue notes to our government at interest. It is time to end this travesty and restore our nation’s potential to evolve into an ideal state. Only Ron Paul stands prepared to take on this monumental task.  He can only do this if the People choose to be Kings. CAN YOU HEAR ME NOW?

Filed under Climbing the Tree of Life, Money, Ron Paul