Ending Ignorance – A Reading from the Book of Tarot for April 11, 2012 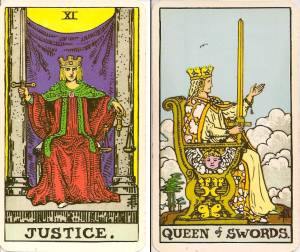 Two Tarot cards are profiled. These cards have been pulled to induce synchronicity. The intention is for you to watch for the consciousness they represent to be reflected in the events of your day. This practice known as Yoga of the West, is designed to build a bridge of intuition between the reader’s unconscious and conscious mind; a bridge to wholeness.

Justice is the path of consequences. The figure on this card sits between the pillars of wisdom and a veil of ignorance hangs in the background. On this path we break through the veils of illusion or deception that harbor ignorance. The square on Justice’s crown represents well-ordered thoughts, law.  Her right hand holds a sword straight up in victory; she dispenses logical fair-minded justice. A sword is double-edged; it cuts both ways, signifying impartiality. The scales are in the figure’s left hand, the intuitive hand, telling us that logic is balanced by intuition. The clasp holding the figure’s robe is a square representing the law that is protecting the wholeness of us all, the circle within. Wholeness requires adherence to impartial karmic balance of the law, good or bad. Consequences must be accepted and harmonized in order for us to master this path. Achieving wholeness on the path of Justice requires breaking through the veils of ignorance with the realization that all is good.

Today’s face card repeats yesterday’s: The Queen of Swords. This queen is a random selection seeking the ideal aspect of personality to pay attention to in relation to today’s archetype. She has resurfaced despite intense shuffling and cutting of the deck, pay close attention. Watch for the personality aspects of the Queen of Swords either within yourself or in someone else.

The Queen of each suit applies ideal female personality strengths and weaknesses at work on all the paths on the Tree of Life (kabbalah). The Queen of Swords is a freethinker as symbolized by the single bird in the sky, and the butterflies on her crown and throne.  She is also a single minded, focused, and powerful person. Her head is above the clouds, she enjoys clarity and objectivity; she wants truth.  The Queen’s left hand is up and welcoming, she is willing to listen. Her sword is straight up; you will get a fair hearing.  But, note the frayed, or tasseled rope on her wrist. In a number of earlier Sword cards you see figures with their arms bound, powerless. This figure has been bound, she has been there, and done that, she has survived, do not mess with her, do not attempt to feed her any lies. The cross to wholeness for this figure is seen in the child on her throne, it is just a head, pure intellect. This queen can be a harsh critic; she doesn’t give herself or anyone else any slack. The path to wholeness for this person requires realistic tolerance that finds value in what is, without the need to look for what isn’t.

People also consult the Tarot as an oracle. Caution is advised. An oracle opens the door to spiritual deception as easily as spiritual truth. To read more about Yoga of the West go to http://bit.ly/9BiovO